A new industrial revolution is taking place, and it’s electric. The road to a fully electric future for Europe has already been paved with new collaborations between the automotive industry, mobility providers, battery cell manufacturers, electric vehicle and last-mile start-ups; evolutions in battery range; and intensified pan-European government efforts to reduce CO2 emissions. Europe has clearly reached a tipping point.

As governments continue to fight against fuel emissions, carmakers have started to phase out the production of cars powered entirely by internal combustion engines (ICEs). The production of electric vehicles (EVs) and hybrid electric vehicles (HEVs) is soaring. A report by J.P. Morgan estimates that by 2025, EVs and HEVs will account for 30% of all vehicle sales. Whilst this may not seem significant, compared to 2016, just 1% of global car sales came from plug-in electric vehicles. By 2025, this still leaves ICE vehicles with around 70% of the market share, but that percentage is expected to fall to 40% by 2030.

The case for Europe

The European Union (EU) has reinforced its focus on fighting climate change with new strategies to strengthen the European Green Deal. Members of the European Council agreed on the goal of achieving a climate-neutral EU by 2050. In response, the European Commission announced a new clean energy strategy which includes references to the electrification of end-use sectors such as the automotive industry. Its plan calls for 1m EV charging points, and set a battery manufacturing capacity target of 200 GWh/year by 2025.

Whilst actions to decarbonise the EU economy were underway, battery electric vehicle (BEVs) usage increased across France, Germany, Italy, Spain and the UK. By the first half of 2020, BEVs accounted for just over 60% of all EVs across the Union. Additionally, more than 27% of sales in these five European countries are now electric (compared to 8% in 2019), including pure BEVs and hybrids. 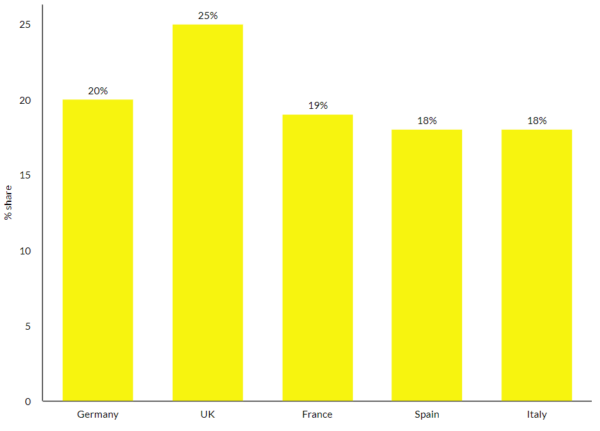 And in reaction to the economic consequence of COVID-19, EU governments have introduced stimulus packages to boost recovery and to accelerate the social acceptance and adoption of EVs. On this trajectory, plug-in electric vehicles will rise from approximately a 2% share of total new sales in 2017 to around 9% by 2025 across the EU. That’s almost surpassing 1.5 million vehicles by the middle of the next decade. With such a spectacular move away from ICE vehicles, it is not unfathomable to expect that only plug-in electric vehicles and HEVs will be sold by 2025.

What does this mean for jobs?

As the acceptance and use of electric vehicles grow, battery manufacturing and charging infrastructure will need to catch up. This will have an impact on the entire European battery value chain; from raw and active materials supply and demand to cell and battery pack manufacturing, and from application and integration to recycling and 2nd life. 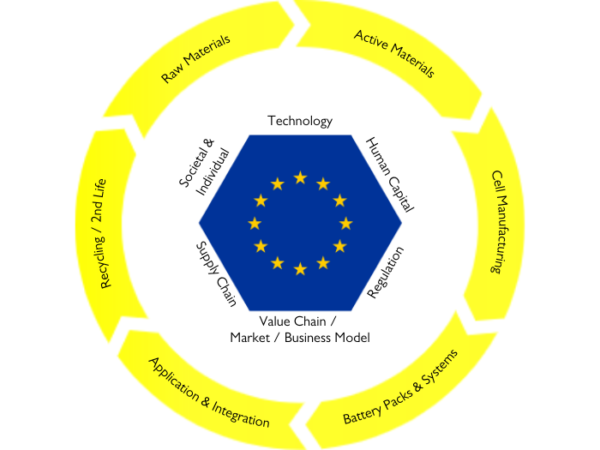 As a result, the European battery value chain has already attracted €60 billion in investments in 2019 alone, and that number is growing. New projects across the value chain are expected to create between 3 and 4 million direct and indirect jobs over the next few years. It follows that approximately 800,000 workers will need to be trained, upskilled, or reskilled by 2025 to meet this demand – that’s a staggering 160,000 workers to be trained every year.

But which new skills are required to bring about these rapid changes? And how do we prepare companies and reskill workers for it? Continue reading to learn more.